That’s how the famous ancient Greek author, Homer, poetically described olive oil in the Iliad. Throughout the history of the Mediterranean, the olive was a symbol of wealth, fame and peace. It played a role in culture, religion, trade, technology and the economy. Over 2,000 years ago, Hippocrates, regarded as the father of medicine, was the first known medical practitioner, to use ointments based on olive oil, to treat wounds and traumas. Certainly, a man before his time, because science has now proven that olive oil has incredible health benefits.

Many researchers believe that using olive oil rather than butter or other artery-clogging fats can add years to your life. People who consume half a tablespoon of olive oil every day are less likely to die from heart disease, cancer, Alzheimer’s or lung disease, according to a new study. Why? Because olive oil is rich in healthful antioxidants, vitamins and polyphenols. Polyphenols are micronutrients that naturally occur in plants, which prevent and reverse damage to your cells caused by ageing, the environment and your lifestyle. 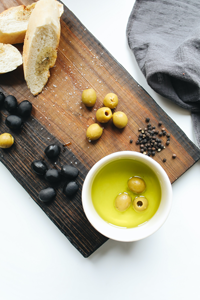 Olive oil has many other health benefits. Like antibacterial properties, nutrients that can inhibit or kill harmful bacteria in your stomach, reducing the possibility of stomach ulcers and stomach cancers. Also, olive oil combined with fish oil (a source of anti-inflammatory omega-3 fatty acids) is particularly beneficial in the treatment of arthritis. One study showed that this combination significantly improved joint pain and morning stiffness. And another study showed that a Mediterranean diet, rich in olive oil reduced the risk of type 2 diabetes by up to 40%.

The benefits of olive oil also extend to skincare, as it protects and hydrates even the most sensitive skin. Add to that, revitalizing and strengthening skin tonicity, helping repair skin tissues and it’s an antioxidant ally, to combat aging.

One of the other advantages of the olive oil you use in meals and salads: once bottled, it has a shelf life of 18-24 months. Though, it’s even possible to extend that with the right packaging. In fact, there’s one type of glass packaging that can extend the shelf life by much more than that. In recent independent tests by ENERLAB (accredited and recognized by the French Ministry of Scientific Research) it found that olive oil kept in MIRON’s violet glass lasted up to 30% longer than olive oil kept in clear, green or brown bottles. Also, much longer than transparent plastic containers.

The experiments by ENERLAB used unique methods to measure the effects of sunlight on the olive oil. Because light supports life itself, in both plants and animals. Light energy in ultraviolet light (UV), visible light and infrared (IR), play a vital role in the overall quality of food and natural products. Light is the reason for degradation and oxidation which destroys nutrients, loss of color, as well as the formation of unpleasant odors and toxic substances.

The study by ENERLAB concentrated on measuring the biophoton emissions. The invisible light emitted and absorbed by all living things, including us. Foods and natural products like olive oil, with a higher biophoton content and with higher biophoton emissions are healthier and can be stored for longer. This is both scientifically interesting and commercially interesting (extended shelf life). In simple terms, the violet glass protects natural products from harmful light rays, while allowing beneficial rays through to preserve and enhance the olive oil.

So, the next time you’re thinking about packaging for olive oil or any other solid-gold natural liquid or cream, consider MIRON.

MIRON Violetglass produces an extensive range of 100% sustainable bottles and jars for consumer products in many industries, ranging from health and nutrition to cosmetics and personal care. If you’d like to know more mail info@mironglass.com or +31 528 7600 60.